Welcome fellow readers to the second session of Morbid Moments, an exploration into the unknown where we interview people who will definitely satisfy your morbid curiosity!

This week, Morbid Planet sits down with Susan Barsky, a partner in the non-profit Death Cafe.

Erin Chapman: What is Death Cafe and can you explain how the idea originated?

Susan Barsky: A Death Cafe is a meeting that participants attend voluntarily. They discuss topics around death and dying with a view to making the most of their (finite) lives. Death Cafe was started by my son Jon Underwood who had wanted for a while to start a project around death and dying. My husband Alistair saw an article in The Independent talking about Bernard Cretaz a Swiss sociologist who had run some Cafe Mortels doing just this in his native country. Alistair sent Jon the cutting and he decided to adopt the concept which became Death Cafe

EC: What is your role in the organization and how did you become involved? Why is this vision important to you? Can you tell us about the team that keeps things going every day at Death Cafe?

SB: I do the moderation of the website and answer media enquiries and Jools my daughter answers emails and runs the organisation. Donna his widow looks after our Twitter feed. Megan Mooney in the US runs our Facebook page. Many others contribute as needed. We are all volunteers. I was involved from the beginning of Death Cafe. At all stages Jon discussed his ideas about Death Cafe and I was keen to facilitate the first one. i have always been enthusiastic about the vision behind Death Cafe which is to encourage people to talk more openly about death and to acknowledge the fact that we are all going to die. Since Jon’s death I have taken on more of the administration. Jools, Donna his widow and I believe it is imperative that his vision is continued and developed.

EC: Can you explain what goes on at a typical Death Cafe event? Are they casual or formal? How many people usual attend? What is the biggest event that has happened so far?

SB: People see Death Cafes advertised on the website and contact the host to say they would like to attend. They have most often been physical venues with occasional online events. But since the Covid crisis there have only been online events. During a Death Cafe the host will lay down a few ground rules, such as being respectful of others opinions, and confidentiality. After that the host will ask people their names and what made them come to a Death Cafe. Some hosts divide the group into smaller groups to facilitate discussion other hosts keep the group whole. At a DC people talk about death and dying whilst eating cake and drinking tea that is all there is to it. The conversations range from the personal to the mechanics of what happens to our bodies after death. There can be discussions about what people believe or emotions encountered in grief, there is always a wide range of topics.

EC: Can anyone host a Death Cafe event? What is the registration process and are their fees involved?

SB: Anyone who wants to can host a Death Cafe providing they agree to the guidelines on the website. there are instructions about how to do it. There should be no cost to participants, although sometimes donations are asked for to help cover costs. These must always be voluntary as we do not ever want to preclude anyone from attending because they cannot afford it. Once a venue has been chosen the host puts it on to the DC site and I moderate it to check it follows the guidelines. I make it live so its available to be viewed and participants can contact the host to book a place. Some DC’s don’t need to be booked in advance its up to the host to decide.

EC: How many Death Cafes have been held to date around the world? Where is the most popular place for them? Do people hold annual events or are they mostly one-offs?

SB: As of today there have been 10890 DC’s in 71 countries. Some hosts hold several a month and some only ever hold one, it’s not possible to generalise. In the UK there is often an increase at this time of the year because of Dying Matters week when many Death Cafes are held.

EC: How many have you attended personally and what is your most memorable moment from an event? What is the most heartfelt story you have come across?

SB: I have not held any Death Cafes since Jon died as I am not sure how I would feel. I enjoyed holding DC’s in the past. When Jon was alive we held them at the South Bank Festival of the Dead in 2012 and at Jewish Book Week and many other places. I have probably helped about 30-40. The discussions at Death Cafes remain confidential to the participants so I would not feel comfortable sharing any information.

EC: Is Death Cafe a full time job for you? How do you manage your time with the organization?

SB: Death Cafe is not a full time job with anyone now, although Jon spent most of his waking life sorting it. Jools works for the NHS full time and fits DC in when she can. I work part time as a psychotherapist and also fit DC in when I can.

EC: Depending on who you talk to, death means a great many things to people and affects us all differently. How do you interpret death? Being involved with such a large scale project, do you feel Death Cafe influences your life in a negative or positive way and why?

SB: cant give you an interpretation of death, my ideas change constantly. I think being involved with Death Cafe combined with the fact that I’m getting older makes death more present for me and makes it easy for me to speak about death and dying to people because it is part of our life cycle and will happen to all of us. Personally I think this is a healthy way to live. Jon thought that a lot of what goes on in the world is caused by death denial.

EC: What do you expect people to take away from the Death Cafe events?

SB: People usually feel happier and freer after attending a Death Cafe. Far from being morbid they see it as freeing and very often there is laughter. Many people find it liberating to be with others who are comfortable discussing death and dying and feel less alienated

EC: Some people may say the idea of Death Cafe is morbid. What do you say to these critics?

SB: How can it be morbid when it happens to all of us. Its a part of life and acknowledging death helps us to appreciate our lives.

EC: With the world adjusting to pandemic life, how has this changed Death Cafe? How are you adapting to isolations, quarantines and social distancing?

SB: All our Death Cafes are now held online mostly using Zoom. There have always been a few doing this but its now the norm. At a time when death rates are announced every day and many people are losing loved ones this is an excellent time to be talking about death and dying. There are so many conflicting feelings around.

EC: How is Death Cafe financed? If people wanted to financially support your organization, how would they go about doing so?

SB: We have a few people who donate monthly through Patreon otherwise there is no money involved as discussed above we all volunteer our time. We would be delighted if people want to support us financially. They could do so through patreon.com/deathcafe

EC: Where can our readers connect with Death Cafe online and with social media?

The feature photo is attributed to DeathCafe.com. The photo is from a Death Cafe held in Columbus Ohio by Alyse Cho.

Check out another Morbid Moment where we interviewed Miss Vita DeVoid, Entertainer Extraordinaire.

Erin is the owner of Morbid Planet and Morbid Shopping. She also is a writer and co-admin for Vamped.org., a vampire general interest online magazine.

Don't miss these other morbid places 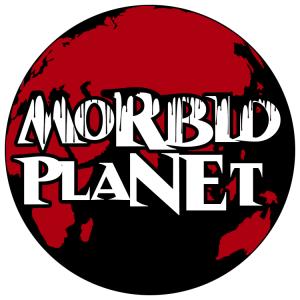 What is Morbid Planet?

Morbid (mor·bid ˈmôrbəd): characterized by or appealing to an abnormal and unhealthy interest in disturbing and unpleasant subjects, especially death and disease.

Morbid Planet is a blog that explores the horror genre and showcases the extraordinary and mysterious world of dark tourism. We also highlight unique people and macabre things, review films, and cover current events and news.

Going on a trip? Make sure to browse our Deathly Destinations! Check back daily for new content and let us satisfy your morbid curiosity!